Sambill Park (M) Sdn Bhd plans to bring the Chuck Chicken Junior Warriors Competition to at least five countries within the next two years to promote the Malaysian animation series to the international market.

“The participants will come to Malaysia to compete in the grand final which is in line with the country’s strategy to promote the Visit Malaysia Year 2020 campaign,” he said at the Chuck Chicken Junior Warriors 2.0 Competition launch, here, today.

Wong said the competition involving contestants aged seven to 12 years, aimed to develop mental and physical skills in the young to enable them to understand their own abilities, as well as increase their confidence level.

Chuck Chicken Junior Warriors 2.0 is targeted to be conducted in various schools within Klang Valley for the qualification round from February until May next year, followed by the final round on June 6 at Sunway Velocity Mall, Cheras, here.

Meanwhile, Deputy Education Minister Teo Nie Ching said the competition was in line with the ministry’s aspiration to make children knowledgeable and to think critically and creatively.

“As part of our strategy for fundamental transformations, the ministry endorses this competition which enables children to develop their skills in different aspects, regardless of their socio-economic status,” she said in her opening speech read by the ministry’s Sports Division director, Zainal Abas.

The Chuck Chicken Animation series has attracted over 11 million viewership and was nominated as the Best 2D animation at the 21st Asian Television Awards event with 180,000 YouTube subscribers. The show has 52 episodes and is in English, Bahasa Malaysia, Mandarin, Bahasa Indonesia and Thai.

The competition’s tickets and more information are available at www.ccjuniorwarriors.com. 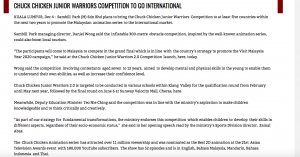